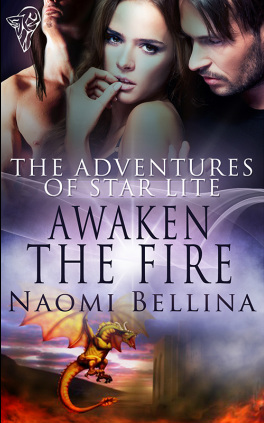 “What the hell is he doing here?” Adam asked, whirling to face Maurice.

“He volunteered to work with Star. Lucas has excellent skills, and we feel he’s well suited to this job.” Maurice frowned. “Is there a problem?”

Fury coursed through Star. “I’m not working with him.” She folded her arms and glared at Lucas.

“Oh, come now. We’ll have a good time together. It will give us a chance to get better acquainted,” Lucas said.

“I don’t want to get acquainted with you. You’re a liar and a thief, and that’s all I need to know about you.”

“Oh dear, you’re upset with me. Let’s have a drink together, the four of us, and chat. Is it too early for cocktails?”

Lucas laid his hand on Star’s neck, and a burst of white-hot energy shot through her. Pleasure mixed with pain, heat tinged with cold. She gasped. The last time she’d seen this man—who had once been Adam’s teacher—he’d turned into a snake, then back to human form. He’d threatened Adam and coerced him into robbing a jewellery store. They’d not parted on the best of terms. What the hell was he doing here?

“Look at me. Look into my eyes. Once you get to know me, I’m really not a bad person,” Lucas said in a low, hypnotic voice.

The room and everyone in it receded to the background, and all Star saw was Lucas’ eyes. They began as a dark green, and as she watched, turned white-gold, then crimson. They were compelling, magnetic, and she couldn’t look away.

“You have such fire in you. Let it out, see what it feels like.”

A surge of electricity moved from her centre up through her body. She’d felt this in the past, when practising magic, but this time was different. There was a wildness about this energy, a tinge of wickedness, a feeling of wanton, unruly lust, like nothing she’d felt before. Heat built between her legs, and she moaned involuntarily. Her pussy clenched, and suddenly she could smell Adam, then Tristan and their male scents filling her nostrils.

She had a flash to the last time they were all together in bed, and her knees went weak with desire. A picture played in her mind of them all naked, in a heap on the floor. Saliva formed, as she saw herself closing her mouth around Adam’s cock, licking it up and down, then biting Tristan on his thigh, raining kisses all over both of them.

Dimly, she was aware that Adam now stood next to her.

“Let go of her,” he growled, reaching out to grab Lucas.

“Uh-uh.” Lucas held up a hand and Star felt a push of power. Adam stumbled back.

Tristan stepped up next to Star, touched her other arm, and put a hand on Adam’s shoulder. A surge of energy flowed into her and she felt the strength of both men release her from the grip of Lucas’ control. Star blinked her eyes, and the spell was broken. Lucas let go of Star’s arm and stepped back and looked at the three of them.

“Well, well, that was quite a burst of power. Where did that come from? I see you all have been up to something. Lovely. I can’t wait to hear about this.”

A thick, hot haze filled the room. Dark red swirls surrounded Tristan, Adam and Lucas. The hair on the back of Star’s neck stood on end, and despite the heat, a chill ran down her spine. All three men were projecting their force and the intensity was palpable. Adam growled again, and Star felt him tense. Tristan tightened his grip on Adam.

Maurice waved a hand and murmured and a cold breeze blew through the room. Immediately, the power dialled down.

“Gentlemen and ladies, that will be enough. What is going on here?”

Star is a character that is easy to like... Adam is great as usual...you actually feel for him as you get to see more inside his head and what is making him tick. The chemistry and heat between he and Star is something you can see. Tristan is charming as always ...This whole series has been great so far and I think this is my favorite so far. There is so many more elements that get added to the story... That the sex adds powers to their magic is just a bonus for me. I believe anyone who like a steamy paranormal book that has a great story line will enjoy this book.  Pam at Paranormal Reads

....Awaken the fire is full of even more twists and turns than the first two books...I love the imaginative new creatures and villains that we find ...The characters have a lot of depth and I love seeing new facets of them even in book number 3. It is amazing to see them grow and evolve as individuals..I couldn’t put this book down!   Katie at Curse of the Bibliophile