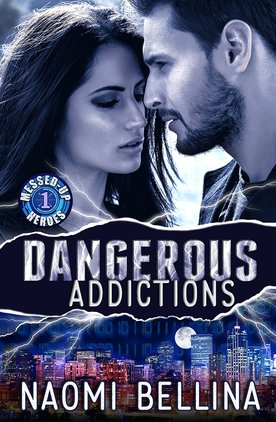 I love both of these excerpts and couldn't decide which one to use, so I'll share them both with you.

"Are we at the marina?"
"Fucking shit!" Riley whirled to look in the back seat, smacking his elbow on the steering wheel. Danika crouched on the floor, her slight body hidden in the shadows. "What the hell are you doing in my car?"
"Tagging along. To find out where you're going." She rose and perched on the back seat. "You're here for that boat, aren't you? Siren of the Sea?"
"I am. What do you know about it?"
"Probably same thing as you. But you go first."
"Uh-uh. I went first last time. You." Aware he sounded like an eight year old, Riley crossed his arms.
"Okay fine."
"And come up here so I can see you. Did you take my wallet back at the bar?"
She scrambled into the front seat and plunked next to him. "I did. Sorry. Had to get you distracted to get into your car. Okay. The boat. I keep track of weird news stories that might be about people like me. Like us. With strange power. Most of the time, there's nothing to them. You do the same thing, right?"
"I do."
"You must have picked up that story, guy says he saw light dancing in the water and sparks coming from some dude's boat out in the ocean. Cops come to investigate, they chalk it up to bioluminescence and since the boat hasn't burned down, figured the witness ate a few mushrooms or swallowed some chemicals."
Riley uncrossed his arms and rested his hands on the steering wheel. "What made you zero in on that particular story?"
"A hunch. Instinct. The guy who owned the boat wouldn't give his name, didn't want anyone to know about him. Most people are media whores. Will do anything to get noticed."
"And you picked out the boat, in the background of the picture. The news story didn't give a name or an exact location."
"Yep. I tracked it to this marina. Wasn't real sure what I would do when I got here. Just talk to the owner, I guess. What's your plan?"
Son of a bitch. The goofy girl had the same idea he did. "No plan. I'm winging it too. But I'm winging it alone. Tomorrow."
"Why not now?"
"Because it's dark and we're both likely to land in lock-up again if we get caught prowling around boat slips at ten o'clock at night."
"I have good vision. I could find the vessel, no problem."
"You're hammered."
"Am not. I snagged a can of Buzz Kill at the bar. I can find the boat."
"No."
"No? I don't recall asking for your permission." She fumbled on the door for the handle.
Riley clicked the locks shut. "What are you going to say, if you find anyone on the boat? Ask the man or whoever owns it, if they made the water light up? Since this person didn't want to talk to the police or the press, I doubt he'll want to talk to you. Especially since you smell like a drunk."
"I do not." She put her palms in front of her face and breathed. "Much. I'll eat a cough drop. Anyway, what's your great idea for tomorrow? You said you didn't have a plan. Maybe it's better if we sneak up on him, confront him when he's not expecting it."
"Somehow, I don't think that will end well. We'll give it a rest tonight, then we can both talk to the guy tomorrow."
"Together?"
"Yes, together."
She gnawed on her bottom lip and drummed her fingers on her leg. "Not a chance."
Before he could stop her, she unlocked the door, tumbled out, and took off.
"Damn it, get back here." He wrenched his own door open and chased after her.
Shit, she moved fast for a pint-size girl. He caught her at the beginning of a walkway and grabbed her arm. "This is not a good plan."
"I know where the boat is. Let go of me."
"You know where Siren of the Sea is docked?"
"I came here earlier and found it."
"Why didn't you tell me? No, forget it. Doesn't matter. Let's go and come back in daylight."
She snatched her arm out of his grip. "I'm going now. You come with me or not."
Gritting his teeth, Riley followed as she marched forward. Stubborn woman would get herself in trouble and much as he wanted to avoid more shit, he needed answers. If she screwed this up, he'd never find them.
"Here." She stopped. "This is it. Looks dark. No, wait, light is coming from below. See, around the curtains?"
Riley walked the length of the boat. Sure enough, Siren of the Sea was painted on the side.
"Hello. Anyone home?" Danika called out.
"Keep it down." He stepped a foot on the boat and knocked on the side. "Hello. Permission to come aboard."
Nothing.
"Let's take a peek." Danika jumped onto the craft.
"Get off of there."
"Come on. I hear something in the lower cabin. We should check it out."
"No, we shouldn't," he hissed, but she already found the door leading below and opened it. A second later, light spilled from the cabin.
"Oh hell. We've got a problem." Her voice wavered, and she stood stock still in the doorway.
Riley moved all the way onto the deck behind Danika and looked over her shoulder into the interior of the lower cabin. "What?"
"I think there's a dead body down there."
He moved past her and stopped when he saw a figure on the floor. Judging by the skewed angle of the arms and legs, the pool of red liquid, and the smell of piss and shit, Riley had to agree with her assessment.

Reviews at Amazon and elsewhere

Dangerous Addictions ... is an action-packed suspense novel that you will not want to put down and will keep you on the edge of your seat.

​This was so amazing. I loved it so much and the author's writing was wonderful. She sucked me into this world of amazement.. she made me feel as if I was a part of that world also.

Very well written and nicely paced. Two very independent lead characters suffering a similar plight continue to find themselves thrown together... The storyline held my interest, with plenty of thought provoking elements surrounding the long term after effects of a nationwide attack against US water filtration plants...a suspense/intrigue novel with a bit of chemistry between the two leads.

Honestly, I don’t know what had me more riveted, the adventures Riley and Danika had or the control that the government was taking to keep people ‘safe’...My first book and certainly not my last, by author Naomi Bellina, has it all. Murder, suspense, and intrigue keep this story rolling at a fast pace. The slow building from distrust, to working together, to something more for Riley and Danika made for delightful.
​From Jacque at The Jeep Diva

Fast-paced and action-packed, DANGEROUS ADDICTIONS by Naomi Bellina is a quirky and unusual read, with interesting characters and a unique plot line - well worth a read. From Linda at Books of All Kinds