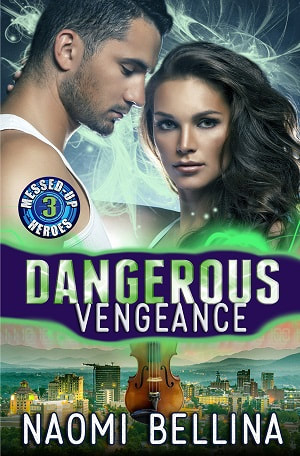 So he sent a guy flying a few feet, no big deal. The dude wasn’t hurt, and no one else was either. Zoe was okay. He’d been taken by surprise and reacted, not overreacted. No one saw him; the situation was cool. And though he’d been close to losing it, he’d handled that asshole Becker without any trouble.
But the cameras picked up the event. Even if there wasn’t visible evidence of Grant doing anything, he’d be tied to the scene. Couldn’t let that happen too often, or someone would be sticking their nose in his business.
He’d have to practice control, have to learn to push the rage down. Maybe figure out how to get rid of the stupid force altogether. Or work out a way to use it for when he became a cop. A skill like that could be useful.
No. Real men didn’t need super power to operate. He’d come up with a way to control it.
For now, he was safe. Had to concentrate on finishing this assignment, that’s all. And to do that, he had to play nice with the weird woman he’d been assigned to work with, keep his head down and his mouth shut.
Easy enough. Grant pulled in a long breath. Go in the store, buy Zoe her soda and water, finish up the day. At least she wasn’t a wimp. Girl had guts, to keep going after getting plowed down and drugged. Blackout. Great. Just what the world needed. Another tool for the scum to use. Date rape, and probably for other applications.
He should insist Zoe have someone keep an eye on her the rest of the day, though he knew she’d blow off his concern.
Not my problem. I’ve got enough of my own.
When Grant returned with the drinks, Zoe had almost finished weeding. He ran the weed whacker around the area, and they bagged up the rest of the clippings. Zoe kept looking across the street, her eyebrows furrowed and lips pursed.
“Don’t suppose you saw a yard waste dumpster around here, did you?” Grant picked up one of the bags.
“Nope. Just throw those in my car. I have yard waste pickup at my house.” Zoe stood, stretched and pulled off her gloves.
“You should have someone keep an eye on you the rest of the day, make sure you’re okay.”
“Don’t tell me what I should do.” She took a drink from the water bottle and turned toward the music shop.
“Don’t be an idiot.” Grant picked up the bags and headed to her car. “You heard the paramedic. He said make sure someone’s around to monitor you.”
“Yeah, yeah.” She waved her hand.
“Pop your trunk.”
“Just put the bags in the back seat. Not like anything’s going to hurt that car. I’ll see you at our next meeting.”
“Yep, see you then.” Grant loaded the bags into her car, shut the door.
Zoe still stood, looking across the street.
“You okay driving with those bags in the back? Looks like your vision is obstructed.”
“I’ll be fine.” She tapped her foot.
“You’re going over to the shop, aren’t you?”
“Maybe. What’s it to you?”
Most everyone had cleared the scene. Grant saw a television truck and one cop car, which drove away as he watched. “Why are you sticking your nose in something that’s none of your business?”
“It is my business. I was involved in the robbery. I want to talk to the store owner, find out what the thief stole.”
“Don’t you think the owner might be upset right now?”
“Maybe I can help.”
“Why, did you see something you didn’t share with the nice police officer?”
“I didn’t actually see anything. I have a hunch and an idea.”
“Oh, a hunch. People love to hear about hunches. Why didn’t you tell the officer?”
“Because cops have the same pissy attitude as you. Women’s intuition doesn’t mean jack.”
“Maybe because it’s bullshit?”
“Screw you.” Zoe pivoted back to face him, eyes narrowed. “No one asked your opinion or permission. I’ll see you later.” She wheeled around and stomped across the street. The scent of sweat, now stronger than the honeysuckle, lingered behind.
Not my concern.
But a nudge of desire licked at him, a feeling he hadn’t entertained for some time. Purposely hadn’t entertained. He didn’t want a woman messing with his mind, or his body. Most of all, not his heart.
Not going to have it shattered again any time soon.