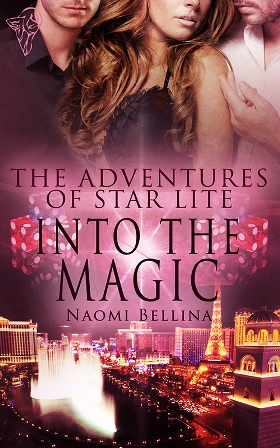 “Are you sure I shouldn’t stay one more day?” she called from behind the door. “If you give me directions, I can do magic. Remember, on Porrima? We did pretty well, together.”

“No, I’ll worry about you and you’ll distract me.”

“I won’t distract you, I promise.”

Star came out of the bathroom wearing a short, see-through robe. Her bedtime garments usually consisted of old T-shirts purchased from the thrift store, which she wore until they had too many holes. For this trip, she’d splurged on this barely there wisp of lingerie. The short style flattered her figure, showing off her legs and hinting at more beneath. Star loved the way the chiffon caressed her skin. Her nipples hardened as the fabric slid over them.

Adam stopped his movements and stared at her. Star gracefully twirled, giving him a full-body view, and she watched his eyes darken and a slow heat flare in them. She suddenly ached for his touch.

“I like it very much. I like what’s in it even more. See? You’re already distracting me. Here’s my credit card. Call the airline.”

Star snatched the card from his hand and flounced away, but smiled as soon as her back was turned. He was weakening, she could sense it. He wanted her just as much as she wanted him, perhaps more. His eyes smouldered with lust that demanded to be satisfied.

While she held the phone and waited on hold, she watched Adam set up protection spells. He walked like a panther around her room, graceful and lithe, his movements sure and adept. He was in his element when he did magic. Why didn’t he want to practise it more? One of his many secrets, which she suspected would soon affect her life.

He had to tell her what was going on. She was certain they were meant to be with each other—she felt it in her heart and believed it in her soul. Why else would they have been thrown together on a strange planet for that wild adventure? Their paths had crossed for a reason, and she meant to find out why.

Her ruminations and pleasure at watching Adam were cut short when the customer service representative came on the line and took her credit card information. She could catch a flight early the next afternoon.

The call completed, Star joined Adam at the window.

“I never get tired of this view, no matter how often I come here,” he said.

“It is beautiful. So many lights. If I squint just right, I can turn them into a rainbow.

Adam laughed and put his hand on her hip. The heat from his fingers penetrated the thin material and made her shiver.

She turned to face him, tilting her head to look into his eyes. Such beautiful eyes! They were deep brown, with flecks of gold, and right now they were filled with such longing that her heart skipped a beat.

“I really should go.” His voice, thick with desire, contradicted his words.

She moved her body closer to his, her breasts and stomach touching him, absorbing his warmth. The sheer fabric may as well not have been there. Rubbing her torso slowly on his, she reached around his waist, pulling their bodies tight together.

“Damn, you feel good. I could spend hours doing this,” he whispered in her ear.

Star ran her fingertips across his chest, stroking the hair, caressing his nipples. She bent and took one in her mouth, sucking it, swirling her tongue around the hard surface. The taste of his skin made her pussy throb with need. She had never wanted a man this badly, had never been wrapped in such desperate longing.

“Star…” It was almost a cry of anguish, but she didn’t stop. Instead, she moved her mouth to the left side, teasing the slick point on the right with her fingers.

With a low growl, he cupped her chin and lifted her face, his golden-brown eyes blazing. He leaned her against the window and pulled her hands over her head. Holding them both aloft with one of his, he undid the satin sash of her robe with the other and ran his palm down her body.

Still holding her, he explored with his free hand, tracing the curve of her hip, the swell of her breast. Star closed her eyes and leant back, the cool glass of the window a sharp contrast to her hot flesh.

Adam slid his hand between her legs, fingers stroking her slick folds. One finger found her engorged clit and he brushed it, slowly, teasing. She moaned and tugged her captive hands, eager to touch him. He continued caressing, fingers searching, driving her mad with desire.

With a final tug, she freed her hands and wrapped her arms around his neck, bringing their bodies close again, desperate to have his skin on hers. The feel of his hard cock against her stomach caused another rush of heat, then his lips were on hers. His tongue penetrated her mouth, probing deep. Everything around her ceased to exist, except Adam. His scent, the taste of his mouth, the feel of his firm hands became her world. When he broke the embrace, she nearly fell, so lost was she in his kiss.

He slid the robe off her shoulders, then turned her around and pressed her onto the window again.

I really love Star, and Adam. They are a lot of fun to read, and very passionate. You absolutely believe that they should be together...had its laugh out loud moments...the author stayed true to her characters...sexual scenes were passionate...pacing of the story was great.

Tawania at Wicked Readings by Tawania

Jen at The Crafty Cauldron

This book starts off sizzling hot so you know right away what you are getting in to. The characters are all very sexy and intriguing...Whether they are together in scenes or by themselves they each keep your attention...Great sex scenes and a good plot keep you entertained. Recommended to anyone who likes a steamy book with magically people. This is not the first book in the series but can be read alone or at least I did.

... the connection between Star and Adam was effortless, there was magic, enough action to keep it interesting and the added chemistry between Star, Adam and Tristan. And it's hot. Things didn't seem to go smoothly for Star she was on bumpy ride with magic, Adam, Tristan and lot of passion...Vegas is always a character of its own as is the magic, so you won't be bored with Into The Magic.

Niina at For the Love of Reading Reviews

Ms. Bellina hit on an aspect of the paranormal that I really like.  Magic.  Yes, magic. Spells, potions, stones, New Age, etc...ordinary people that have that certain magical qualities about them.  When the book opens its hot with a capital H.  And trust me the hotness factor doesn’t let up.  Adam and Star heat up the pages but what kept me in the story was the plot.  Part mystery, part suspense, part magical ...I really didn’t want the book to end.  Oh and Tristan uses his sex magic more than once.  *fans self* ...I really should have read the first book but not doing so, DIDN’T take away from my enjoyment of Into the Magic...

Maven at The Talent Cave