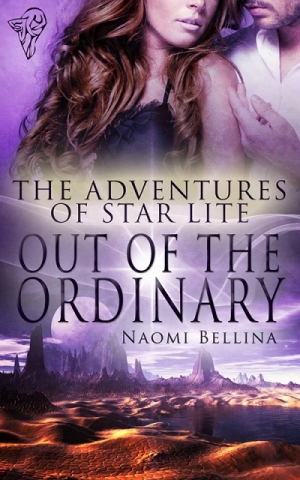 He continued to trail his finger over her stomach then brushed it lightly across her thigh, stroked her calf and foot, before slowly climbing back up her leg. Burning desire roared through her, and she couldn’t hold back any longer. She arched her hips, thrusting her pelvis at him, desperate for his touch at her core.

“Don’t worry, I’m getting there. I want a taste of you first.”

When he put his mouth on her thigh, Star thought she would fly off the bed. Her skin had burned as his finger was caressing it, now her entire body sizzled. She panted and writhed as he licked his way up her leg, electric currents flowing from her head to her toes. He reached her clit and flicked his tongue along the edge—she grabbed his hair and pulled his head up.

“What are you doing to me? Is this some kind of trick?”

“What do you mean? Doesn’t this feel good?”

“Hell yes, it feels good, it feels better than good. Like I’m about to catch on fire and go up in flames. I’ve never had this happen to me. And before you get that grin on your face, I don’t believe it’s just because you’re so good in bed. What’s going on?”

“I would have to say we have wonderful chemistry together, Star. I’m magic, and I am so good in bed, but there’s some kind of special attraction between us. Don’t say you haven’t felt it. Now, can I go back to what I was doing?”

Star squirmed with pleasure as Adam resumed his activity. Whatever caused her body to react to him like this became more intense. He was right, there was something between them, something powerful and intoxicating. She forgot all about the quick and simple plan and wanted this to go on forever. Bolts of bliss danced in her brain and waves of pleasure ran through her body, consuming her.

Adam rolled her onto her stomach and she took a sharp breath and pulled the sheet close to her body.

“Roven, what are you doing here? You’re supposed to be over by the door.”

“I-I can’t help it. You’re so beautiful. I’ve never seen a naked human female. Is your skin as soft as it looks?”

The pixie’s pupils were huge and Star noticed a bulge in his pants. He was obviously highly aroused, and to her surprise, this made her ever more excited, which she wouldn’t have thought possible. She looked at Adam—who had momentarily stopped his activities—and raised a questioning eyebrow at him. He smiled.

“If it makes you happy,” he said, reading her thoughts. “But only a quick touch. I want her to myself.”

Roven stepped closer to the bed and tentatively put his hand on Star’s calf. He ran it up her leg and moaned.

“So soft and warm,” he murmured and, reaching her butt, squeezed tentatively.

Another burst of heat ran through her body. Roven’s hand was different from Adam’s. It was smaller and had a smoother texture. He trembled slightly and she could sense his excitement. She spread her legs, encouraging him to explore further. Slickness from her drenched pussy and Adam’s mouth coated her thighs and her lips throbbed. Roven slid his fingers between her lips and gasped.

“Oh, sweet goddess, it’s so wet! Are you all right? Are you bleeding? Are you hurt?”

“Not like this, they just get a little moist. Doesn’t his sex organ slide out?”

“Roven.” Adam glared, and Star suppressed a grin, certain he regretted inviting the other man to join them.

“Sit there, lean against the headboard. Let me show you what I can do with my mouth besides giggle,” Star said.

Adam eagerly scooted to the head of the bed and while Roven fondled her, she rose up to her elbows and wrapped her mouth around Adam’s cock. It was hard as a railroad spike, and the thought of that rod ramming into her pussy sent a fresh burst of juice between her legs. Star had never been overly fond of oral sex but found the sensation of pleasuring Adam while being pleasured by Roven exquisite. She ran her lips up and down his shaft and teased the head with her tongue, lightly flicking the sensitive spot on the underside. Adam groaned and shuddered. Knowing what bliss she was giving him intensified her own. Even without Roven’s attention, she was drowning in ecstasy.

She lifted her hips to allow Roven greater access to her pussy. He now had two fingers inside her, and his thumb found her clit and stroked it first gently, then with more pressure as she rolled and thrust her hips. Listening to both men breathe hard and moan, knowing they both desired her, melted her insecurities away. All she could think about was the heat coursing through her body and the passion building in her soul. She felt something else she didn’t normally experience with a man—powerful. Her little imperfect body made two very sexy men incredibly aroused. Roven was breathing so hard she feared he would hyperventilate, and Adam moaned and trembled with every slide of her mouth up and down his cock.

"I had some laugh-out-loud moments in this book...the dialogue did a good job of showcasing the characters...
As Star struggles to...come to terms with her attraction to Adam, she finds a renewed sense of purpose to her own life...
I think lovers of sexy extra-terrestrial romance could really enjoy this one!"  CaroB from Hearts on Fire Reviews

"The plot was very unique. That is what attracted me to this story in the first place." Rachel from The Jeep Diva

"It’s original, and a cute, quick read...This was my first time reading this author, and there were some great moments in this book... The relationship that builds between Star and Adam was written well, and there’s an extra bonus of twist and turns with an ending that will leave you wanting to know more."  Maven at The Talent Cave Reviews

"I was pleasantly delighted with this book for being a relatively short read. I simply adored Star's character flaws and all. She was presented as a real women with real issues...I found this book to be witty, charming, believable, and heart warming too. I look forward to more of this author's work." Angie, Reading Machine