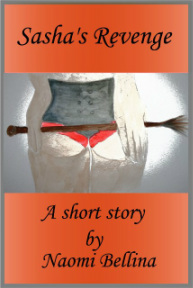 Sasha sauntered around the room, lighting a more few more candles, then came to stand in front of him. She shimmied out of her dress to reveal a black, lace-up corset, thigh-high fishnet stockings, and a black, lacy thong. Planting her feet in a wide stance, hands on hips, she surveyed her captive.

"You look great in those cuffs. How about me? Do you like my outfit?" She put her hands under her breasts and pushed them up, so a tiny bit of nipple showed. Though the corset wasn't the most comfortable garment, it showed off her figure beautifully. Having this much skin uncovered gave her a chill of excitement. The lace thong she wore displayed her ass, and barely covered her pussy. The cool air on her shaved lips caused her to shiver. She felt deliciously exposed.

"Uh-uh, no name calling, and don't jump around too much, you'll wrench your arms out of their sockets. We don't want to mess up that gorgeous body of yours, do we?"

"What's going on, babe? Come on, you said we were cool. Let me loose and let's have a little fun."

"What's' going on is a taste of your own medicine. How do you like being tied up and helpless? Oh, we are going to have a little fun. I've got toys to play with. You like toys, right?"

Reaching into the box, she pulled out a wooden paddle.

"You remember these from when we were kids? I took the bouncy red ball off, but it's still entertaining." She smacked it on her hand and watched with satisfaction as Conrad's eyes widened.

"It packs a nice wallop."

Strutting in her ultra-high heels, paddle in her hand, Sasha felt powerful and wicked, ready to punish the helpless man before her. Though she was normally a kind-hearted woman, and didn't like to inflict pain, having Conrad at her mercy brought out her inner beast.

She hit him on the ass with the paddle and grinned as Conrad yelped and arched his back.

"Hold still. If you move too much, you're going to hurt yourself."

The cuffs she bought were padded and wouldn't hurt his wrists or ankles if he didn't struggle too much. She’d tried them out herself. Leaving permanent marks on his skin would not be the best idea.

"All right, enough is enough. This isn't funny. Get this shit off me, right now!" He jerked his hands, rattling the chain.

"This isn't supposed to be funny, and it's certainly not enough, not yet."

Sasha stood for a moment, watching him struggle to get loose. She'd promised herself not to seriously hurt him, and was pleased to see her set-up worked. Her cousin used to have a heavy bag hanging from the ceiling, and while drawing her pictures, she’d had a vision. This was the perfect way to hold her prisoner captive while she taught him a lesson.

His arms were up just high enough so he could still keep his balance with his feet bound. He was mostly immobile. Which was good, because judging by his growls and cussing, he was not a happy camper. She walked around him, heels clicking on the concrete floor, confidence and excitement replacing her nervousness.

"If you relax, it won't be so bad. What did you tell me, the last time we were together? Go with the flow, baby. The pleasure is going to take over soon."

"You better let me go, right now. You don't know who you're messing with."

He scowled at her, and she took a deep breath. She knew she was taking a chance with this operation, and he could very well come after her later. It didn't matter. She had to do something to quiet the demons that raged in her mind.

Comment from a reader at Night Owl Reviews:  "I love short stories like this... any author who can drag me into a story so fully in just a few pages gets a chance to show me more."