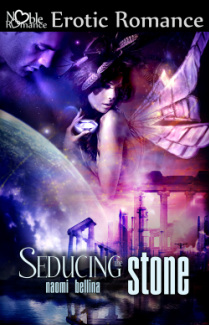 "I’m not letting you go just yet. This person you were with, I want to talk to him. He knows where to find gems, right? I need him to get me an emerald."

"No, he doesn’t know where to find gems. His name is Max, and he’s just a security guard who tried to stop me from taking the sapphire."

Kuron looked unconvinced. Knowing the whole story would soon be all over Adonea, Raya quickly relayed the events which led up to her being in the museum the second time.

"So you see, he’s nobody, and there’s no reason for you to bother him. The sapphire is gone, and you’re out of luck. Let me go, and I’ll forget we ever had this unpleasant little encounter."

"The human, Max, obviously likes you. He jumped in front of you when I fired my stun gun. I think he might talk to me if I were to convince him it would be good for your health to do so."

Raya recalled Max had indeed thrown himself in front of her, to protect her. A warm glow filled her at this thought, and she lowered her face to hide a smile. It had been a long time since anyone had performed such a chivalrous action for her sake.

"You say he’s going to be at this museum tomorrow? I’ll pay him a little visit then, after their event. He should be in a good mood and amenable to helping me out. I could even offer him payment for his services. Humans are so avaricious. I’m sure he’ll jump at the chance for some extra cash."

"Why do you want an emerald? Talk about avaricious. What are you dwarves going to do with an emerald?" Raya stopped as it suddenly dawned on her.

"You need to refresh your emerald at the temple of Espenar, don’t you?" She saw the look of annoyance on Kuron’s face and knew she was right. "I thought your groves were looking a bit shabby lately. Well, good luck finding the right emerald. We searched for a long time to locate Starry Night. If your people weren’t so contrary, you could just ask us for assistance. We would be happy to help you acquire one."

"And if your people weren’t so selfish, we would ask for your help."

"We are not selfish! You’re just being greedy! You have plenty of water from the streams on your side of Adonea, and we sell you as much of the water from Lake Cerulean as you want."

"Yes, and you make a tidy profit off that water. You know good and well the lake water is what keeps us young and healthy. You should share it with us free of charge."

"That water is our livelihood; selling to others is how we survive. We can’t just give it away. Come on, Kuron. We’ve been over and over this for years. Our people are not going to come to an agreement, and you keeping me here sure isn’t going to solve anything. And you’re not going to find the correct emerald without doing a proper investigation. Now let me go!" Raya tugged at the ropes binding her.

Kuron’s expression changed as he observed her attempts to escape. His eyes turned dark, and a slow, lustful smile spread across his face. "But you and I have a bit of unfinished business, my dear. Do you remember the last time we saw each other? Years ago, at a birthday party for some ambassador. I seem to remember you spurned my affections that night, but you told me if I ever caught you, I could have you. I do believe I caught you."

To her chagrin, Raya did recall making a foolish promise to Kuron, after downing quite a few glasses of elderberry wine. What had possessed her to do such a thing? Kuron was irritating and arrogant, certainly not the qualities she preferred in her lovers. It appeared, however, she was trapped. She prided herself on keeping her promises, and Kuron seemed determined to hold her to this one.

Kuron smiled. "I see you’re just as randy as ever. Excellent! Too many fairies lose their passion when they reach a certain age."

Raya bit his wandering hand, and Kuron yelped as he pulled it away.

"Watch the age comments. I’m still in my prime. Now untie me, get your clothes off, and let’s get to work."

Kuron loosened the knots and undressed while Raya rubbed her sore wrists. Promise or not, she would get even with Kuron for this. No one kidnapped and tied her up. Well, not without her consent, anyway.

"Sit down, and I’ll show you who’s lost her passion," she said as she pulled out the chair. Kuron sat, and Raya knelt in front of him. Observing his robust erection, she felt her pussy juice up and reflected on how unfair it was that dwarves had the hardest, thickest cocks of all the creatures on the planet. But then, that was one of the reasons she enjoyed dallying with them.

Grabbing the base of his cock, she lowered her mouth down as far as she could and sucked the shaft, then pulled back up and licked the head, her toes curling in sexual excitement. Two months! How could she have gone without this for two months?


Reviewed by Night Owl Reviews
I have to say, I thoroughly enjoyed Seducing the Stone...Raya is an extremely dynamic character, quite fully developed and well thought out even though this is a shorter novel. Max is an exceptionally driven character, having many of the admirable human traits that are found in hero/heroine types of characters. The story itself is quite fun, and the characters are quirky and delightfully charming on all levels. The story is also detailed enough to easily develop a spinoff or series, which I personally would enjoy seeing. This is a very fun story that will bring many people great enjoyment.   http://www.nightowlreviews.com/nor/Reviews/Hitherandthee-reviews-Seducing-The-Stone-by-Naomi-Bellina.aspx