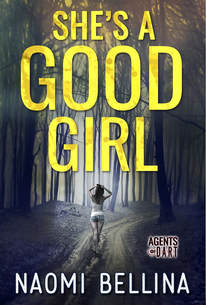 ​Exiting her car, she stood for a moment, listening. A noise from the back of the house drew her attention, and she scanned the area. No other houses were visible from the top of the hill, and she couldn’t even see the road. Just land, trees, a large shed, and the house in front of her. The noise stopped, and the silence was almost palpable.

Nice house. Not as large as Bowen’s, but in decent condition. A bench, a few chairs and a table occupied the front porch, and Lily could easily picture sitting outdoors in the cooler weather and staring at the mountains. The “smoke” that rose from them in the morning was supposed to be beautiful, and from here, the sunsets would be spectacular, too.

She took her stun gun from her field bag. The weapon was small, to fit inconspicuously into a pocket, and a special-issue for DART. It packed a harder punch than the traditional electroshock weapons most law enforcement used, and also had a setting that would stun a person unconscious.

Most likely she would not need a weapon for this meeting, but habit made her slide it into a pocket. DART agents didn’t advertise their presence as law enforcement, and wore an unofficial uniform of khaki pants and polo shirts. An unflattering look on her, but practical and easy to maintain.

She headed to the rear of the house and turned the corner. A man stood just off the side of a stone patio. He held an axe in one hand and a pistol in the other. Pointed at her.

“Whoa.” Lily held up her hands. “Miguel Estrada sent me, said he told you I was coming. Sent you a message? A text?”

The man dropped the axe to the ground and walked over to a metal table. He kept his gaze and the pistol focused on her while he picked up a phone.

“Yeah, there’s a message from Miguel. What does he say?”

“Why don’t you read it?” Didn’t anyone here check their texts?

Dillon thumbed his phone, glanced down at it, then up at her.

“I’ll stand right here while you read. I’ll even put my hands on my head, if you’d like.”

“That won’t be necessary.” Dillon lay the gun on the table and stared at his phone for several moments.

Lily removed her sunglasses and studied him, a cold knot of dread forming in her gut. The photo of Dillon that Miguel had sent her showed a soldier with his hat pulled down low, shadowing the top half of his face. The rigid set of his mouth and chin said he didn’t have time to screw around with picture-taking, but she couldn’t make out the rest of his features clearly from the grainy photo. Now, under the bright sun, she could see his face just fine.

“Your name is Dillon Hurst?” The man scowling at her she knew by a different name. “You said your name was Jack.”
Dillon’s head snapped up, and he took a step closer to her. “Lily?”

Oh, hell yes, it was him. The man she’d spent several hot, amazing hours with almost two years ago. Now, like then, his brown hair reached just past his ears, dark stubble covered his jaw, and his green eyes stared into her soul. Even from a distance, he radiated a power, one she’d found irresistible that night. How could she have missed that in the picture?

Maybe because the night she’d met him they’d spent a lot of time in the dark, and her libido had been on overdrive, clouding her mind with desire.

She drew in a breath and put her hands on her hips. “Yes. I gave you my real name when we met.”

“Jack is my real name. My middle name. I use it sometimes when I’m in civilian mode and, uh, with women.”

“To make sure they can’t find you?”

“Yes, sometimes. I’ve been stalked before, so I don’t give my real name at a first meeting. And if you recall, I tried to find you. You’re the one who ran and hid.” He cocked his head. “You look different. Good.”

“I was in an evening dress the last time we met.” Lily struggled to keep her tone even. Shitfire, she did not need to see this man again, let alone work with him.

“You looked good then, too.” A half-smile curved his mouth.

The same smile she remembered from that night in the back seat of his truck, right before he’d kissed her. Lily fought and failed to keep the color from rising in her cheeks as the memories came rushing back.

She’d been working with DART for two years and was stationed at Fort Benning for a time. Miguel and his wife invited her to their Christmas party, a huge event they put on for friends and colleagues. Someone introduced her to Jack, a soldier who was temporarily training at Fort Benning with his Army unit.

When she’d touched Jack’s hand to shake, a chill had run along Lily’s spine. Not cold, more like an electric current that warmed and tingled. They’d both had a few drinks and found they had a lot in common. A slow dance song came on, and
Jack had led her to the dance floor, pulled her in close, and kept her there.

Lily wasn’t the kind of woman to fall instantly in lust, but something about Jack was impossible to resist. Anyway, she figured, they’d never see each other again. The stress of a few tough missions had her wound up, and one wild night of fun would do a lot to ease it.

She’d been a huge flirt, teasing him about his hair, and he’d told her he was allowed to let it grow while in training. Same for the light beard—taking a break from shaving, he said. They talked a lot, drank more, and ended up in his truck, steaming the windows to second base, then third.

​They’d planned to go to a hotel, but he got a phone call that demanded his attention, and during that call, Lily decided sex with a stranger wasn’t the best idea. She’d made an excuse and escaped back to her own car and driven away, hot and more wound up than ever.

"Good suspense read. Suspense, action, riveting, drama, and romance. Hard to put down."
"I really enjoyed the plot twists and the suspense that kept me on the edge of my seat. I can't wait for book two of the series."
"A good introduction to the series with lots of action, intrigue and suspense."
"Absolute page turner... I couldn’t put it down, read it in a day."
"A fantastic story filled with passion and suspense coupled with multi-dimensional characters."
"If you love a badass heroine, this book is for you."
"As a lover of Mysteries and Thrillers, this book delivered just what I hoped to read...I would highly recommend this book to any of my friends and cannot wait to enjoy other books in the series."
"I thoroughly enjoyed this book, it has all the good traits I look for - great characters, action, suspense, love and lust, hot steamy sex, intrigue and of course a HEA."